Magic trick for a wedding

I already asked to the T11 team and they told me I would have better luck here.

Here is the situation, my bestfriend is going to be married in 1 month and I though a magick trick mixed with my speech would be better than a speech alone. (Yes I know, I’m quite in a rush but I had to organise his bachelor party and I had a new job, my girlfriend left me... so you know why)

I do have some skills, I have already done weddings and birthdays but it has been a while... 2 years I think.
I have an amazebox and I though it could be a good idea and I know it’s good for a large audience.

But I still wonder... is there a better trick ? Or what could it put in amazebox to make it really romantic and fun and mix a speech in it? I do have some ideas but I also know there are lot of great magicians on this forum who could help me with their experience.

So, I apologize for my bad english, I hope your eyes are not bleeding, reading this.

Thank your for your advices and I hope this could help other people who are in the same situation!
Reactions: 010rusty

Ok, first off great question. Second off, if I understood you correctly you would like to add a trick to your Best man speech rather than gather everyone together for just a performance. Now I am accustomed to adding small magic tricks that serve as an emphasizer to the speech. I used to add tricks to my FFA Speeches back when I used to compete.

If this is what you wish to accomplish I would suggest using props that are organic to your situation. One idea that occurs to me is that since the best man toast is typically brought up by tapping a spoon against a wine glass to get everyone's attention you could perform a variation on AirBorne. Which looks something like this 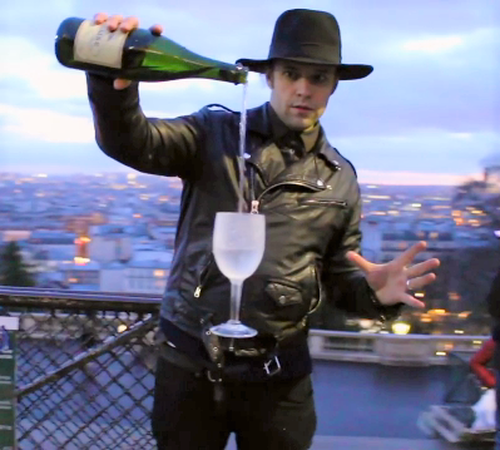 The glass appears to levitate as you pour liquid into it.​
Oddly enough there is usually millions of these on sale in every magic store but I could only find 1 brand in stock, and I have no idea if its any good. However, this could easily be used as a banger in your speech. For instance you could say at the end of your speech "to conclude I pour a glass to celebrate this great marriage" *start pouring* "Because their love " *pull hand away and point the the crowd causing glass to levitate* "is one of true magic"
or if you can come up with something less cheesy you could use that as well.

Now if your not looking for that and you instead want to have the trick come first and add the speech behind it would be alittle bit more complex.
The problem with the Amaze Box in my opinion is for that to work you would you would want people to walk away one at a time during the performance/speech, however (in my opinion) that feels like could appear quite boring and take time, but of course you could do your speech while they are walking up and putting things in the box. If you do choose to do this you could get everyone to write their name on a piece of paper Including the groom. Then have the bride randomly select a piece of paper that draws her attention and have her open it up to find the groom's name proving that "even when she can't see what she's looking for she can always find the person that matters the most".

And as a final throwaway joke idea that I don't expect you to use, but its just to get the creative juices flowing here is a silly joke:
You have the box set up where the guest sign in and have 2 different colored slips of paper with one is that is orange and one is blue. The orange cards say "this marriage will fail", and the blue slips say "this marriage will succeed" You have a sign set up that reads "Please vote on how you think this will work out"
Then when you give your speech you open it up to find EVERY SLIP IS ORANGE.
You turn to Friend and say "Well I hope you pick partners better than you pick guest"

So yeah That's all I got at the moment. If you could further elaborate on what you are looking for I would be more than happy to keep helping you. I am all ears.
J

I've been trying to come up with a way to say this, that doesn't come across as mean spirited or accusatory but I'm really struggling.

As someone who is married, and who helped plan a tightly scheduled wedding, I don't recommend trying to perform anything at someone else's wedding unless they have -explicitly- requested you do so, or in the very least that you've run it by them before hand and gotten their say so to proceed.

It's not about you. It's about them.

If you haven't been involved in planning this sort of event it's very difficult to comprehend the amount of stress it can involve and how much the couple does not want to deal with last minute "surprises". No matter how cool you might think it is, there's every chance that the couple will just find it annoying at best, and insulting is a very real possibility.

So - if you really don't think you can write a speech that can stand on its own, and you want to use a trick to spice it up, in the very least please take these things into consideration:
1) No participation. Nothing gets selected, or signed, no volunteers to do anything.
2) Make it 100% about them. If the audience is looking at you at the end of this, you did it wrong.
3) Make it extremely quick. It's not your day, this isn't your time to do a show.
4) 1 trick at most. Again - not your show, not your day. Don't steal the attention.
5) Do NOT make any reference whatsoever to the chance of a marriage failing. I cannot emphasize how much this is in poor taste.

I personally cannot think of anything I would be willing to do at someone else's wedding, because I do have that perspective of being a groom. Again - I'm not trying to be a jerk. But I don't know how many people here have planned their own wedding and from this perspective, there are things I just don't want guests throwing a spanner in the works of a plan we have worked carefully to arrange.
D

My thinking is the polar opposite of WitchDoc. I've done catering for literally countless weddings. Most are exactly the same...same music, same program, same, same, same. Same=boring. While it's always about the special couple, doing something out of the ordinary is what creates real memories. The only thing I really remember about my wedding, 20+ yrs ago, was the DJ expressly going against my wishes of doing a conga-line. I HATE conga-lines. But I did it, had fun, and I still remember it. The best wedding photos are usually the ones no one expects....behind the scenes, people acting naturally, real world stuff. I say go for it. Do what you think is right. You have the floor, use it to shine a light on them. Believe me, they'll get so much attention they probably will welcome a little reprieve. Again, this comes from someone who HAS planned their own wedding, worked weddings, made wedding cakes... Everyone will remember it because it IS something special. BTW, of all the weddings I've worked and/or attended...not one had anyone doing magic. Not even a single trick. Have fun and let us know how it goes.

This was going to be my suggestion too. It's a brilliant trick, and perfect for a wedding.

Most magicians will already have the gaff needed to do it. You can pick up the tutorial for free here:

I’m in total agreement with WitchDocIsIn on this one. If you want to give a great speech for your best friend on his wedding day, don’t do a magic trick. Speak from the heart, be sincere, and do the best you can. Drunk uncle Frank in the back might not be entertained by that, but so what — your friend will appreciate it and that’s all that matters.
Reactions: RealityOne

Get the book "The Approach," by the great Jamie D. Grant.

Skip ahead to Chapter 67, "Weddings."

Then go back and reread and do (it's a workbook, too) the whole rest of the book.

That's my advice. Which is his advice. So it's, like, second-hand advice.

But it's all I've got at the moment.
Reactions: CWhite and JoshL8

Having been hired to do magic at numerous weddings I can say that weddings are tremendous places to do magic! That said, as was mentioned, your speech is all about the couple. Period.

One effect that can be done as a tribute to the couple as a standup piece is Axel Hecklau's TWO:Fusion. Brilliant, workable, and has all the pieces to a great tribute effect.