Review: a tool to help easily and quickly master the Aronson or Tamariz stack

The Trainer Deck by Thom Parkin

Unlock your ability to perform astounding card magic with a memorized deck!

Like most of the arts, card magic is never static. There are new developments and discoveries, as a result of innovation and creativity. And there are trends that come and go. It's safe to say that one of the trends in card magic over the last decade or two is a revival of interest in using memorized stacks. Card magic that uses a "mem-deck", as it's often referred to affectionately, is so powerful that the effects will seem completely mind-blowing and impossible even to magicians who are unfamiliar with this amazing tool.

Stacks have been used in card magic for a long time, but many of them - like the Si Stebbins stack or Eight Kings stack - rely on recurring patterns, which makes them easy to remember, but also increases the likelihood of them being discovered, and also requires some mental gymnastics any time you are working with the stack. So what if there was a way to have a stack that didn't look anything like a stack, and could be openly shown to spectators without any fear of detection? And where you didn't need to use any formulae or do any mental calculations? Suppose you could easily know the location and identity of any card in the deck?

Enter Simon Aronson, who is considered one of the pioneers in this area, and first brought his Aronson Stack to magicians in his book A Stack to Remember in 1979. Then bring in Spanish magician Juan Tamariz, widely considered one of the world's greatest living performers of the art of magic. His book Mnemonica first appeared in his native language in 2000 (four years later in an English translation), and is a masterful work that introduced his Tamariz Stack along with numerous brilliant applications of it.

Is it worth the effort to learn a memorized stack? This is an area of card magic that I've not explored much myself until now, and it certainly isn't the place to begin learning card magic. But it is a place where you can end up, and there are some real treasures and miracles to be found there for the persistent adventurer. Those who dedicate themselves to mastering it will almost certainly return with many rewards. Not only will card magic with a memorized stack completely fool other magicians who are watching your sleight of hand closely, but it also enables you to do what for lay people is on the level of miracles.

But how can one best go about learning what seems to be an entire deck of apparently random cards? Aronson and Tamariz have some suggestions to help us accomplish this, but many magicians are looking for shortcuts that will speed up this process. There are techniques and tools that can help, and arguably none are better than The Trainer Deck from Thom Parkin. This isn't a deck you'll use for performing in any way, but is simply a tool that was developed from the ground up, to help you master the Aronson Stack or the Tamariz Stack, with a separate Trainer Deck available for each.

I first came across Thom from his ingenious creations in a different branch of magic: magic combined with technology. In the real world Thom is a professional software developer, so technology is where he makes his bread and butter, and where he has real expertise. But for Thom it's not just a job, but also one of his loves.

But another of Thom's loves is card magic. So it was a natural fit for him to combine the two, which is what he's done with two great products that I've previously enjoyed immensely and can recommend. Instant Card Magician lets a spectator use their own phone to turn them into a magician, and gives them a script for correctly identifying the exact card that you draw randomly (genuinely random!) from the deck. Even more impressive is Parkin Email Premonition (P.E.P.), which lets you reveal anything (genuinely anything!) via an image or text in an email with a timestamp proving that the email arrived before the selection was made.

With The Trainer Deck, Thom applied his creative skills to a different problem: to come up with a way to help people learn the Aronson Stack or Tamariz Stack in the fastest way possible. People working with these stacks will know that the key thing to remember in order to use a memorized stack is the number in the stack for a card of any value/suit, or to be able to name that value/suit based purely on the number. As anyone familiar with the work of renowned memory expert Harry Lorayne will know, the best way to remember things easily and quickly is by finding a way to associate apparently abstract concepts like numbers with a concrete image.

Well Thom Parkin has done the hard work for us by coming up with visual clues for each and every card in the stack, to help us quickly and easily make the appropriate mental association. There are two versions of the Trainer Deck available, one for the Aronson Stack, and one for the Tamariz Stack, and the basic concept is the same with each.

Regardless of which of the two Trainer Decks you buy, what you get is a deck of 54 playing cards. They're packaged quite plainly, and while they won't match the quality of your favourite high end cardistry deck, it's quite adequate for the purpose they serve. The images have been created under Thom's direction by Hiba, a professional storybook artist from Coffee and Pen Art.

The two Jokers are extra cards, and these include a QR code or link that brings you to a support website that Thom has created for each Trainer Deck, which explains how to use the deck. Many other systems that teach people how to memorize a deck use a peg system, where you first have to associate symbols for numbers and for suits, and require you to master that system first. The Trainer Deck is much simpler, because each card in the deck has an image that immediately lets you associate any card's value, suit, and number in the stack.

The support websites that you get access to when buying the deck have many informative and helpful tips about how to go about learning the stack, making best use of the trainer deck, how to set up and reassemble the deck, and various training exercises, including how you can use the back design as a crib. But the most important page is the one which goes through each and every card explaining how the image conveys the card value, suit, and number in the stack.

Sometimes you'll still just have to rote learn things - e.g. that the hole you're swinging your nine iron club (9 of Clubs) you is a par 47 (stack number); or that the house constructed in a 44 shape (stack number) is at address #6 (the value) - but the mental images will still make this easier. Memory experts sing praises about the importance of being able to associate things and visualize them, and the images that make up the Trainer Deck do exactly that, and have been created from the ground up by Thom himself. Being able to directly associate the stack number with value/suit of a card makes his system superior to other ways of learning a stack, and has real advantages when working with it, because you're not just remembering a sequence, but have direct access to the information you need.

Besides other helpful tips, the website for the Mnemonica Trainer Deck also explains how to perform a simple trick with the stack, detailed suggestions from James Marshall about how to expand your mastery of Mnemonica to other mentalism, and links to other relevant web resources. The website for the Aronson Trainer Deck has information teaching you to perform several tricks with that stack, and links to several tricks and other useful online resources for that stack.

As an alternative to the physical Trainer Deck, Thom also offers an option where you get new cards emailed to you digitally on an ongoing basis, enabling you to master the system in 90 days. While that has advantages for delivery, having a physical deck to use as a training tool opens up new possibilities for training exercises, and is probably the ideal method, because you also have a physical product to come back to and use.

It would be a mistake to judge this product on the basis of the price-point, which is on the high side. You're not simply paying for the material cost, but for the thinking and work that has gone into making this, and for the value it will have in giving you an easier path into the incredible card magic that relies on mem decks. Also bear in mind that a professional artist was hired to do the artwork.

The idea of memorizing an entire deck of cards will seem very intimidating to many of us, even if we've been doing card magic for quite some time. Often we won't even attempt to get over this first hurdle. Thom Parkin has done card magicians around the world an excellent service by winding down the difficulty factor, and making this so much easier.

Are you like me, that you've always wanted to get into doing card magic with a memorized stack, given how astounding and powerful it is, but you've never quite dared? Thanks to Thom Parkin's The Trainer Deck this is no longer the impossible assignment it always seemed.

Where to get it? https://www.memdeck-trainer.com/ 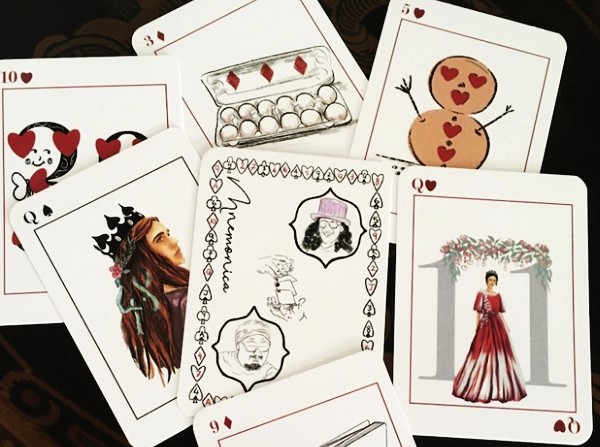