The Adventurer deck also has a pedigree. It was designed by David Huynh and produced by Riffle Shuffle, and is the sequel to the Explorer deck, which was created as a result of the same collaboration in 2020. Both decks are part of the "Explorer" series, and use a similar style and approach, but in different settings.

David is a popular graphic designer and illustrator who has more than 50,000 followers on Instagram. The original Explorer deck represented the first time his artwork would be mass-produced, courtesy of a print run of 2,500 decks. In that deck we join three characters on a space shuttle, journeying through space to the stars, exploring the whimsical landscape of a distant planet characterized by vibrant pink/purple and red/orange colours. 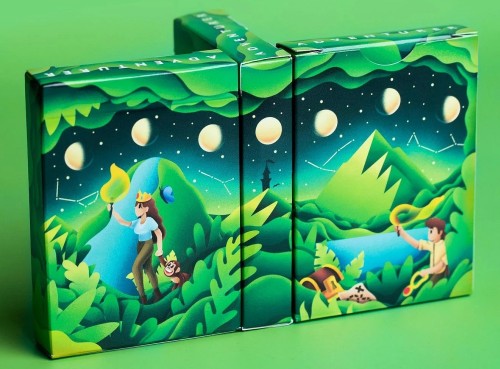 The Adventurer deck represents the second entry in this series, and gave David the chance to explore a new colour palette that departs from his signature purple and pink, along with a new setting. This time our explorer friends are heading for a very different coloured landscape, dominated by the fresh greens of mountains and jungles. The tuck box introduces us this delightful setting, along with two of the characters that will be exploring it. Like the original deck, a panoramic image that wraps around the tuck box looks particularly rewarding when a few decks are placed alongside each other, so we can see the entire picture.

The card backs pick up elements of the artwork seen on the tuck box, with an enchanting and charming mirrored design. Prominently featured here is our female explorer searching for treasure. She's hand-in-hand with her monkey friend, against the backdrop of mountains, and under a pleasant night sky. White borders help emphasize the engaging artwork and playful design. 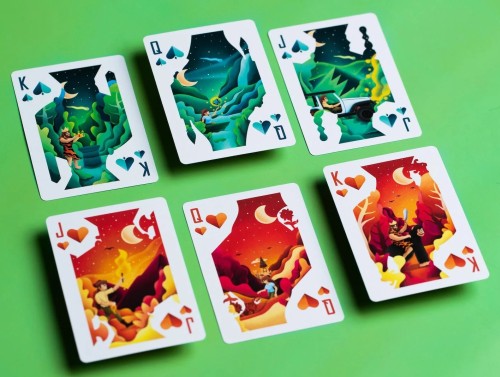 While the original Explorer deck depicted scenes of a faraway planet, the Adventurer deck sees our explorers pursuing their treasure-seeking quests through forests and jungles, and even among deserts and mountains. All the pips in the deck are two-toned split pips, with the Spades and Hearts using two shades of green, and the Hearts and Diamonds using red and orange. While the overall look of the Hearts and Diamonds cards have a similar feel to those in first deck, the lush green of the Spades and Hearts produces a very different feel. Another change is that the pips now also have the benefit of some shading, which wasn't evident with this deck's predecessor.

But the court cards are the real highlight of this deck. Like the Explorer deck, the Adventurer deck turns the court characters into a large silhouette shapes, and each of these becomes a window through which we peer into an exotic world. The Aces borrow from this style of the court cards. Each features a giant pip in silhouette, through which we catch glimpses of background scenes that include mountains, forests, and rivers. 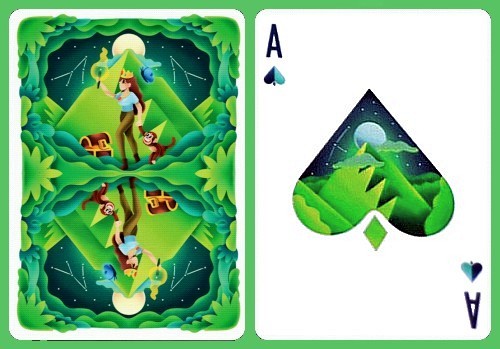 The Adventurer deck is a fully custom deck of playing cards with a great deal of charm and colour, which makes it very suitable for card flourishing. But it also serves equally well when enjoyed for playing card games, because as a novelty deck it remains functional, as is evident from clear and practical indices.

The split pip design employed throughout the entire deck ensures that the number cards also look very beautiful and in keeping with rest of the deck, with a unique arrangement and fully custom look. 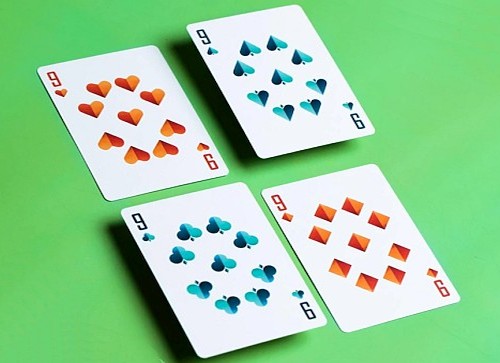 The Kings all feature a bearded and crowned figure in a Tarzan-like outfit; the Queens all depict our lady friend from the tuck box cover engaged in various aspects of exploration, while the Jacks picture her male companion doing things like reading a map or driving a safari vehicle.

While the first deck recycled and shared some of the artwork between court cards, that's not the case with the Adventurer deck. Each court card is a fully independent design, and depicts an entirely different scene. Together, they give the impression that there is a larger story going on, and invite you to imagine your own narrative. 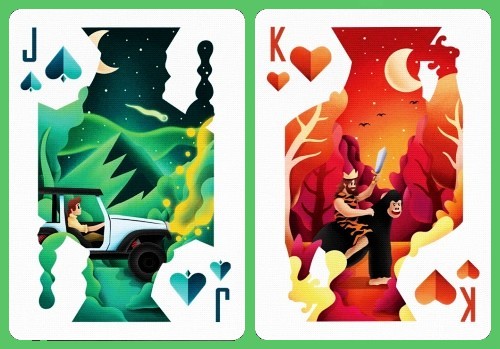 The Jokers picture some of the accessories used by our explorers: a sword and a crown. Meanwhile the two bonus cards that come with the deck form a diptych, where our three explorers are portrayed in a larger scene that sees them relaxing with three animal friends, in a beautiful natural setting.

Both decks from the Explorer series were printed by USPCC on their premium Bee Casino stock, which means that they have an air cushion style embossed finish that handles well, combined with a durability that will outlast your average deck with crushed stock. 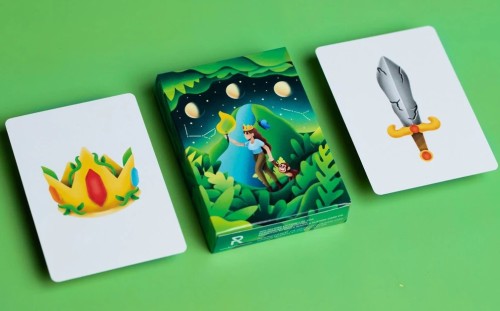