The Butterfly Black decks are something truly exceptional. These are direct descendants of the highly regarded Butterfly Deck that was created by Czech magician Ondrej Psenicka. This remarkable deck was first conceived in 2016 as a marked deck for magicians, and employed a truly innovative system of markings that allowed you to do things that are impossible to do with any other marked deck. Proof of its success was that Ondjej successfully used it to fool Penn and Teller on their Fool Us show.

But aside from the marking system, the original Butterfly deck also garnered praise for its beautiful back design, which was available in your choice of blue or red. So it's not surprising that ongoing demand led to it being subsequently reprinted in a second version the following year. The most recent version of the Butterfly deck released in 2020 features an entirely different colour scheme altogether: jet black. This latest incarnation of this popular deck was made available in two main editions: Black and Gold, Black and Silver. A slightly less glamorous and less expensive Black and White was also produced.

More importantly, for the first time this gorgeous deck was not printed exclusively as a marked deck, but in an unmarked version. That means that the beautiful design you see here can also be enjoyed for card games and poker. 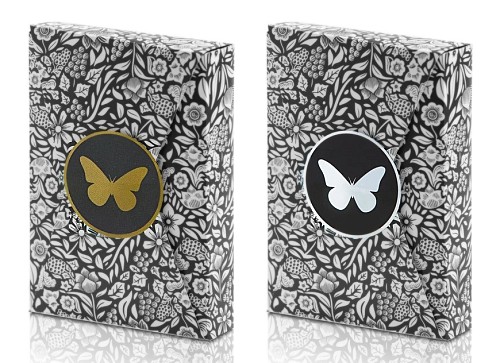 The Black and Gold deck (which is what I have) is basically the same as the Black and Silver deck, except that all the trimmings come in gold instead of silver. The deck comes with a custom paper sleeve to avoid the need for the usual plastic wrapper. This sleeve has a busy black and white design, featuring two stylish black butterflies on the front. Sealed with a round butterfly sticker, it unfolds so that you can keep the wrapper intact even after opening.

The tuck box inside this wrapper looks absolutely stunning. It relies on an understated matt black, which makes the gold foil butterfly and the gold foil stripe on the front look all the more amazing. It also has a custom "Black Series" seal which you'll have to crack open to get at the beautiful cards inside, and this custom seal gives an added sense of sophistication. 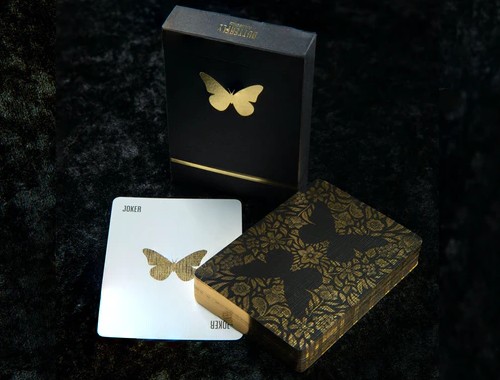 While the outside of the tuck box looks almost minimalist in its elegance, the interior of the box is anything but that. Once we open the tuck flap, we are greeted with a shiny patterned gold foil design that decorates the full interior, aside from the words "The sky's the limit" at the bottom of the box.

The cards themselves are equally stunning, with borderless backs that showcase a lush patterned design that goes all the way to the edge of the cards. The card backs feature nothing less than shiny gold foil for top good looks. The twin butterflies that are the centrepiece of the back design are created by negative space, which produces a terrific effect on its own. I particularly love beautiful how the borderless design looks in fans and spreads, and this effect is certainly amplified by the use of shiny gold foil. 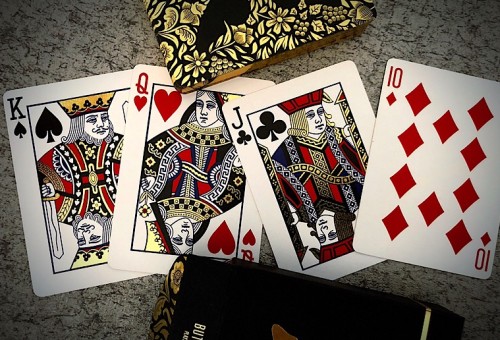 And if that isn't enough bling for you, you'll be pleased to learn that the deck is also fully gilded in spectacular gold, so that no matter how you're looking at this deck, it shines. The golden gleam also includes the faces of the court cards, which are presented using the traditional designs with a simplified colour scheme of red and black, but with one important addition: metallic gold foil. Yes, you really get gold foil on the fronts, and on the backs, and and on the sides, and words can't convey how luxurious this all-round gleam looks.

The number cards are basically standard, but there are two short lines set at right angles on two opposite corners, which adds to the overall sense of something special and unique. The Ace of Spades is highly decorated and is also touched with added gold foil. Even the other Aces get an extra measure of loving treatment, with giant pips that reprise some of the patterns from the card backs. 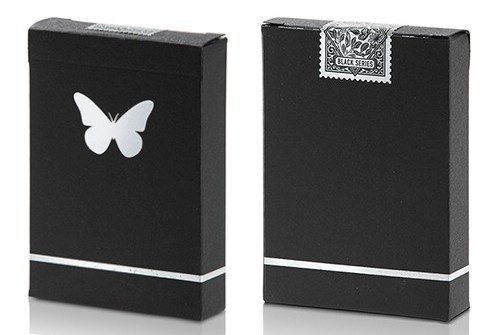 Two Jokers round out the deck, each with a simple butterfly silhouette, one in gold, and the other in black. A bonus blank faced card is also included.

Once I had separated the cards from some initial stickiness produced by the gilding, the deck handled beautifully. The Butterfly decks are all produced by Cartamundi, so the cards feel very supple and are pleasant and consistent to work with. As with all Cartamundi decks, the print is spot on. 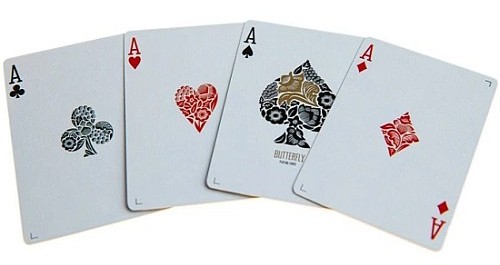 Besides the Black and Gold and the Black and Silver versions of this deck, a slightly more affordable Black and White deck with black gilding was also released, courtesy of a crowdfunding stretch goal. But as good as that looks, for me it's really the glamour of the Gold and Silver decks that has the most appeal. And of course, all three decks are also available in marked versions as well, which gives you access to detailed video tutorials explaining the markings and their potential.

The original Butterfly deck was a huge success in light of its ground-breaking marking system. But it was just as much a visual triumph as it was a technical one. The design was a thing of beauty, and now we finally can use a version of this deck at the card table without needing to feel guilty about using a marked deck, and where we can enjoy a thoroughly luxurious look that really takes everything to the next level. If you want to impress at your next game of cards or poker, this is about as good as it can get. 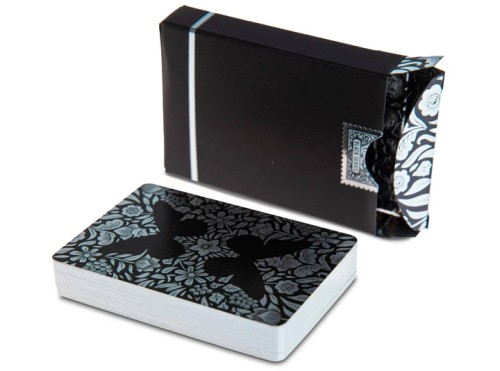