A mentalist miracle now with an even higher quality watch

Liam Montier's Timeless is not entirely a brand new release, since it originally appeared back in 2010. But that is good news, because it means that this isn't a trick that is completely untested and unknown. As magicians, we can have a level of confidence about Timeless that we can't really have about other shiny offerings that are just hitting the market for the very first time. You only have to read some reports about the original release in 2010 to know that this is an excellent piece of magic has been the subject of rave reviews from working magicians, and that it creates astonishment in the real world.

What is new, however, is the look of the 2020 version. Dubbed Timeless Deluxe, this latest release takes what is good about the original, with two new looks, and new video instructions. I didn't own a copy of the original, so I can't compare them. But the advertising copy describes Timeless Deluxe as "better than ever: a more modern, attractive watch design and band, as well as new routines and improvements." Despite only being able to judge this product by its latest version, I can say that it is excellent in its own right.

Timeless was created by Liam Montier and released by Vanishing Inc, the brand and home of magicians Andi Gladwin and Joshua Jay. Andi and Josh were also closely involved with its development, and the routines taught here have the benefit of their insights and ideas. So let's find out more about this great mentalist trick, that has had the benefit of a new-and-improved edition this year. 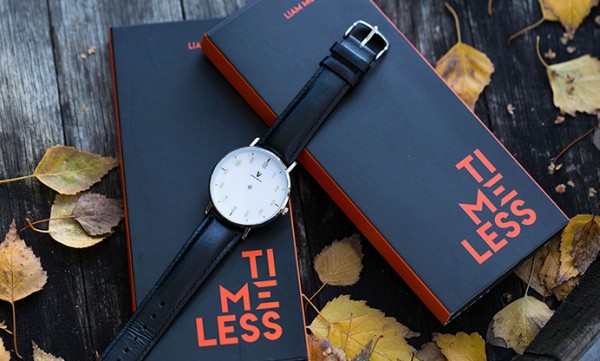 Can you plant a thought in someone's head, and then steal it away? You offer to demonstrate this by removing your watch, pulling out the knob that adjusts the time, and allowing your spectator to turn it as much as they like, moving the hands to any random time. With your head turned away the entire time, the spectator now views the watch and remembers their chosen time. Even though the watch is then placed between their hands, you manage to steal their thoughts, revealing the exact time that they chose completely randomly.

But even more astonishing, to prove that this was just an implanted idea, when they take the watch from between their hands, you've apparently stolen the hands from the watch. In fact, they have completely vanished! The watch simply has no hands, so there is no way that they could have even selected a random time in the first place! To add to the mystery, the watch is completely examinable at the end.


This trick was performed on Penn and Teller's Fool Us by Frederick Falk (Season 2 Episode 7). The ad copy says it has also been performed on America's Got Talent (although I haven't figured out which epsiode). If it's good enough for TV, is it good enough for you? Let's take a closer look. 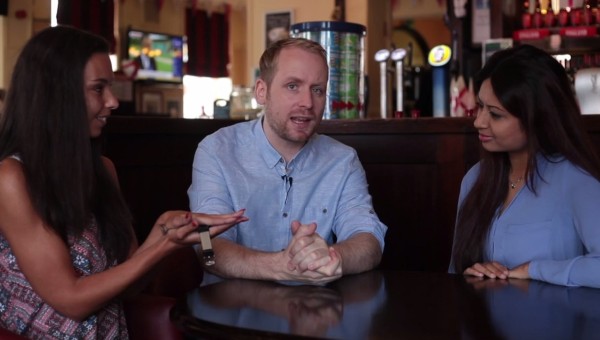 What you get is a slim box that contains the watch, enclosed in a well-padded foam insert for protection. Inside you'll find all the essentials for performing the effect, including a link to a password-protected site where you can download an instructional video.

The deluxe watch comes in two styles: Midnight Black (a black band with a white watch face), and Patriot (red and blue striped). In the video Andi refers to the first as the "classic" watch, and the other as the "hipster" watch. 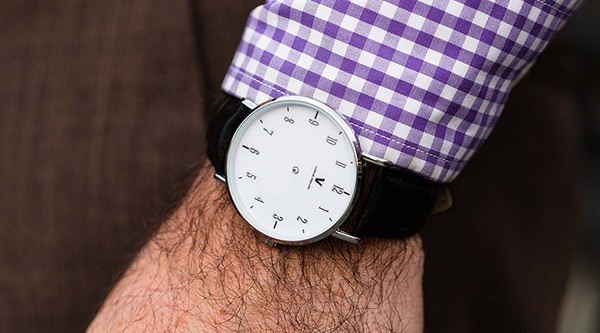 Both look modern and attractive, and I opted for the Midnight Black version since this is quite similar to the watch that I normally wear on a daily basis. It's a dress style watch with a black leather band, and has a white face, with the numbers one through twelve around the dial. My immediate impression was one of style and quality. It has a classy look that evokes quality without drawing too much attention to itself. Since my current everyday watch is also a dress watch with a black leather band, this is a natural fit for me.

The metal of the actual case appears to be stainless steel, unlike cheap replica watches that I've made the mistake of buying in the past, and which can quickly discolour. The band also doesn't look cheap, and should go the distance without any problems. Do be aware that the watch can't be used to replace your everyday regular watch, because it doesn't actually keep time. 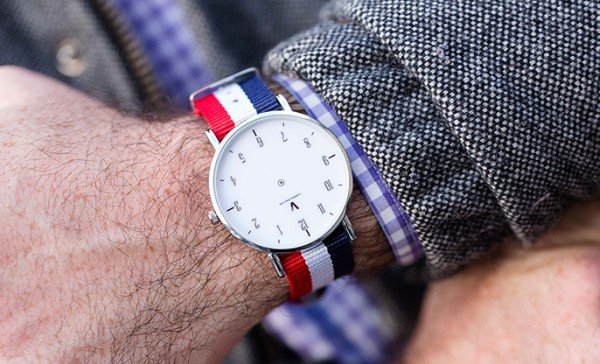 No written instructions are provided, and you'll be relying entirely on the online video instructions. These run for about 16 minutes, and include the trailer with the performance itself, instructions about the set-up, and about the handling and performance. Teaching is by Vanishing Inc's Andi Gladwin, and the majority of the video features a front view of Andi talking about and demonstrating how the trick works.

Andi provides a lot of practical tips about small details, which will help you avoid things going wrong. There's also some discussion about the presentation, and what points to emphasize. In the final couple of minutes Andi shares his idea for a `tossed-out deck' style of routine using Timeless, where three people think of a time after spinning the watch hands, and where you simultaneously reveal their times, and then as the kicker show the hands to have vanished. 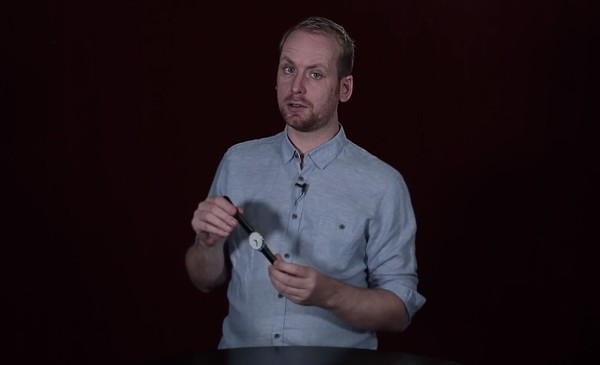 The method used to accomplish Timeless wasn't what I expected, and I can only praise it for its simplicity and beauty. It's certainly very easy to accomplish, even with minimal practice, and you can really focus on making the presentation interesting. The method isn't likely to be figured out, making the trick all the more baffling. I can't give away the method, obviously, but I can repeat the ad copy, and say that it is entirely accurate: "The method is diabolical and simple; no electronics whatsoever are required. Better still, the effect can be learned instantly and requires no difficult moves at all."

Andi explains how he accomplishes the setup and reset very easily and quickly in walk-around situations, so that the trick can be repeated for different groups if necessary. Andi himself uses Timeless for walk-around and for parlour situations.

Even if your devious magician mind suspects the method, you shouldn't dismiss this trick due to its simplicity. What makes magic strong is the presentation, and Timeless gives you all the tools you need to pull off what seems to be a real miracle. 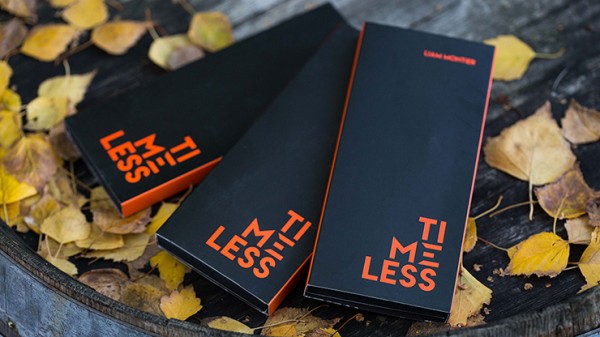 Don't let the simplicity of this trick deceive you into underestimating its impact. It's a super simple method, very easy to accomplish, and it's really all about good presentation. It lets you do a two phase routine that first has your crawling into the mind of a spectator and discerning a completely random time that's only in their mind, and then performing the additional miracle of making the watch hands disappear. Your spectators will really be questioning reality after seeing this stunner!

You can even repeat the trick if you want, with different times. And everything you get is good: a quality watch, and video instructions cover everything you need to know for performance. Plus you can be learning and performing this in no time, and it's a proven product that has a reputation for amazing spectators.

People who've had the original watch almost universally testify that it is easy to perform, and creates jaw-dropping moments. The fact that you can let people examine the watch afterwards only helps strengthen the mind-blowing impact. So simple, and so good. 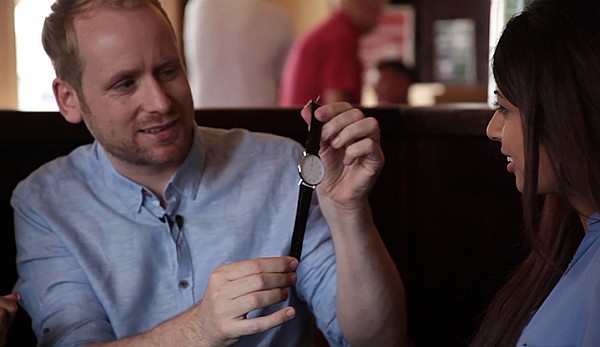