What Is Big Trick Energy? (AND SMALL ANNOUNCEMENT)

Hello everyone! As none of you may know tomorrow is my birthday. I am Entering my 20s. So as a gift to my self I am doing something I've always enjoyed, but haven't done in years: Posting every weekday for a week. Back in 2018 I did a thread called Top 5 Jaw Dropping Moments in magic, and once a day I would count down shocking moments in magic. One of my favorite threads. And I feel like bringing it back this week with BIG TRICK ENERGY WEEK! So For the next 4 days check back everyday for a new post. Now to start the week off lets begin by explaining, what exactly it is So with with that explanation out of the way lets Get into it!

WHAT IS BIG TRICK ENERGY? 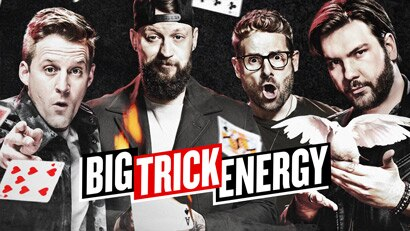 ​
This is Television show that stars the "Bad Boys of magic". These men are Eric Lecrec, Wes Barker, Alex Boyer and Mr.TricksForFun himself: Chris Ramsay. The show is a slightly edgy take on the magic show format. The show centers on the 4 magicians a they journey to a single location and perform magic and pranks on both each other and themselves. This show Premiered on April 22nd and currently airs every Thursday on an American Basic Cable Channel called TruTv. That's just the basics. So Let's Break this down a little bit


THE SHOW'S PREMISE​
As mentioned before hand the show follows four magicians traveling to a destination and messing with strangers and each other along the way. As far as I can tell this is NOT a hidden camera prank show, so I will not say that. It appears to mix recording elements of Don't Trust Andrew Mayne, and The Carbonaro Effect (Both are different types of magic prank shows). It looks more like Don't Trust Andrew Mayne where the spectator usually is aware they are being filmed. Rather than The Carbonaro Effect, where it is obvious that the spectator is unaware that there is a camera. However, occasionally segments do look like the audience isn't aware. So it looks like a mix, but for the most part the camera and camera crew are in plain sight.
So with that said, yes it is quite obvious. The Premise isn't really that original. The whole "Magic group messing with each other" was done In Magick Balay's show Close up Kings, but as I said it is intentionally "EDGY", and that does give it originality. Especially in the realtively Squeaky Clean world of magic television. So, how far is it alowed to go? Well.. for that we'll have to look at...

When this show was first announced I knew Immediately the channel. TruTv. Home of Tv shows made by youtubers. Like Adam Ruins Everything, HotOnes, and various others.
What is TruTV? It is a basic Cable Station Here in the states that is owned by Turner Broadcasting. Turner owns like every basic cable Channel, including CNN, and is obviously under the ownership of Ted Turner. Basic Cable channels are able to get Away with much more than a network, however as I said Ted Turner and his boys have a thick line of whats okay and what not. That being said TruTV is home to what many consider the most EDGY show currently on air: Impractical Jokers. So, BTE has been able to get away with some crazy stuff, but is it any good? 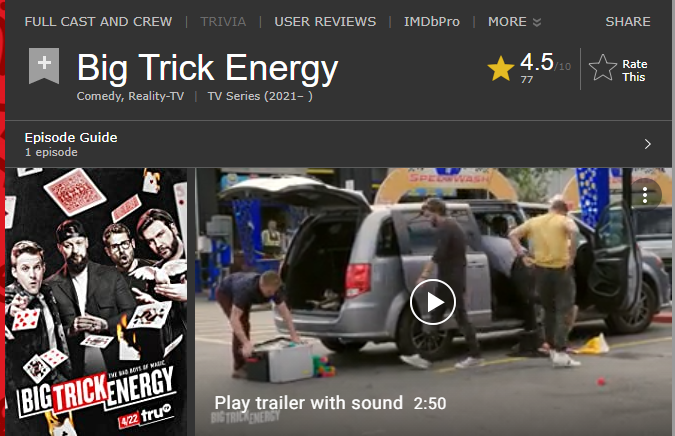 With Only 5 Episodes out the immediate reviews are... bad. I follow the Impratical Jokers sub reddit and they have had a field day THRASHING BTE 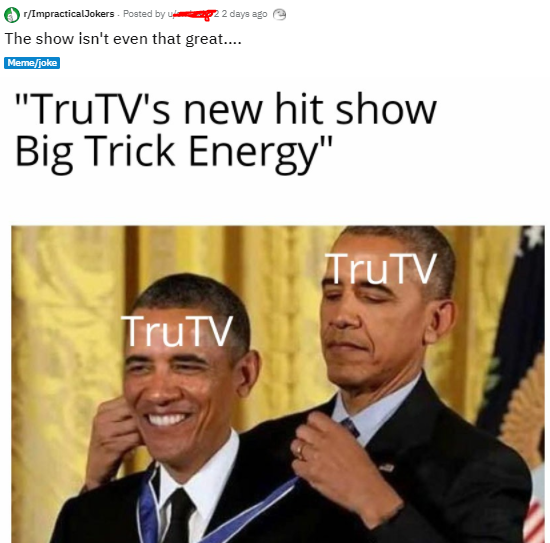 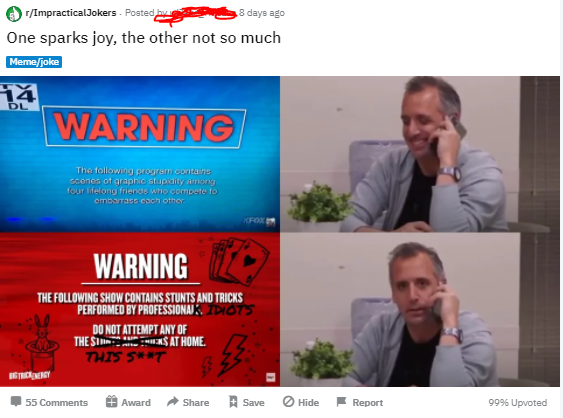 And the Fellas on r/Magic have been... somehow more harsh

So yeahhhh... I decided to make a quick chart to Detail some of the magic shows to come before it, and rank them with the Y Axis Representing magicians' Enjoyment, and the X-Axis represting Laymen's Opinions. 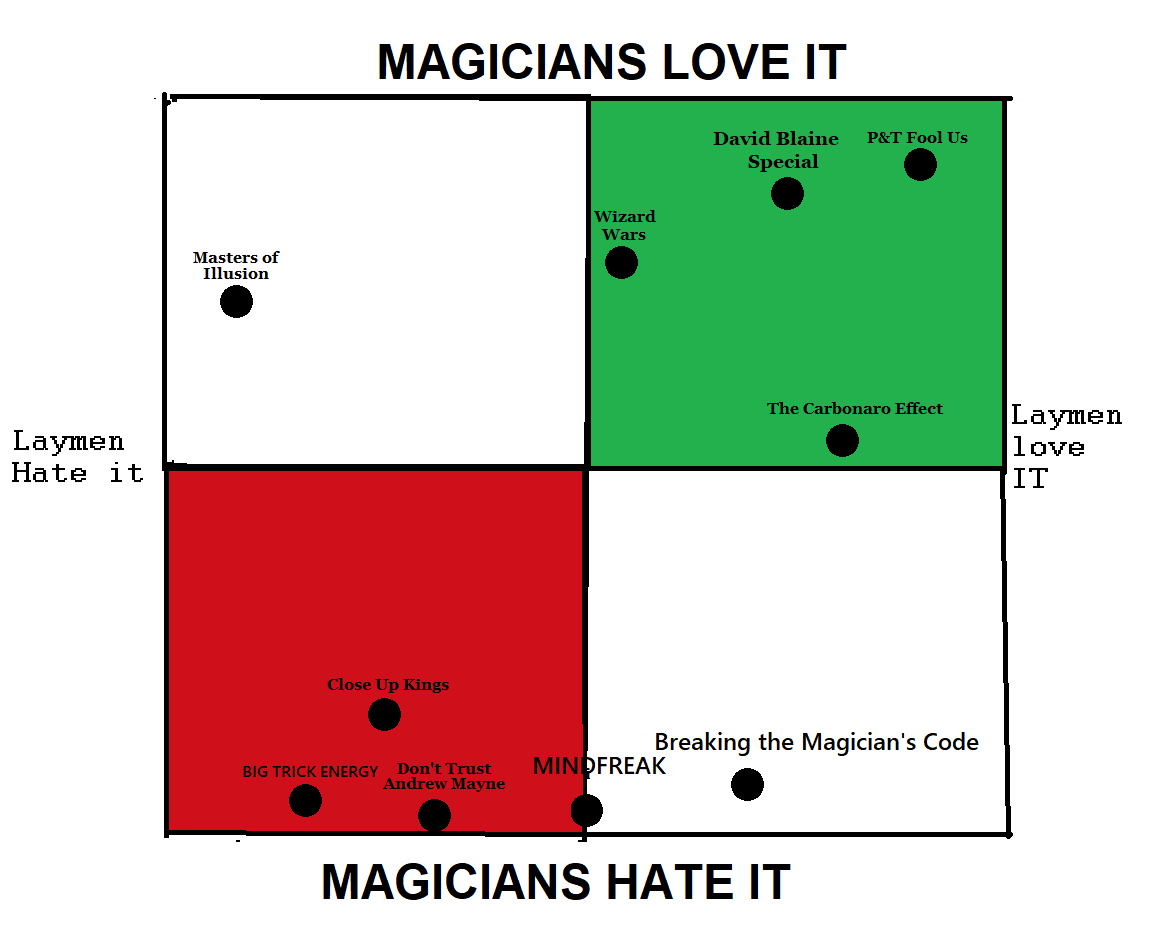 You Want to be in the green, but stay out of the red. The chart was based on IMDB scores, r/magic reviews, magic cafe reviews, and Estimations. As you can see It's not looking great. The show was only ordered for 10 Episodes instead of the typical 12 so you can read between the lines. HOWEVER, reviews are not the be all end all for renewing TV Shows. That falls upon


RATINGS​
How are the ratings? How many people tuned in??
IDK. I couldn't find anything but we can make some guesses with
-LEAD IN
If we learned anything from the Conan O'Brein Tonight Show it should be clear that what show comes on before your show effects your shows views greatly. So what comes on beforehand? The TruTV staple: Impractical Jokers, so thats great! ...but... the last few episodes are not that lucky. These last 7 or so episode's lead in show is the the behind the scenes Impratical Jokers. Which is just basically a rerun but with captions that include fun facts which honestly isn't going to get many people to change the channel (in my opinion of course). So without people tuning in to watch IJ and staying around I expect these last few episodes to get lower and lower. I could be wrong of course.

There we have it! one day down. I hope everyone joins me tommorrow on my BIRTHDAY, as we continue this special week!
See you then.